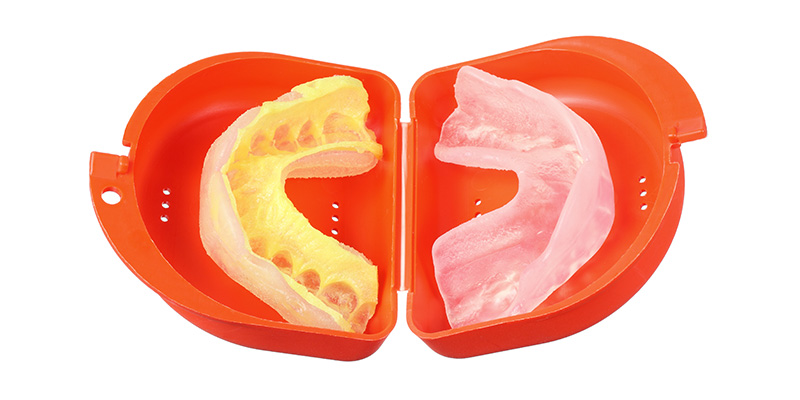 Clenching (bruxism) is a widespread habit. Approximately %50-96 of adults face this problem. This habit is seen in about %15 of children and generally stays unnoticed.

Bruxism does not have a specific reason. Various problems causing stress in daily life (intense work schedule, problematic relationships etc.) may cause clenching during sleep. Consequently, the applied force on teeth may rise up to 4-5 times compared to chewing. Unnoticed by many, teeth clenching and grinding habits stand out with unwarranted pain on various areas of the face, jaw and teeth.

Grinding and clenching usually appears involuntarily during the night when sleeping. Although short-lived, the force that emerges during this time may cause serious damage to both the teeth and tissue. Depending upon the erosion, it can cause hot-cold sensitivity, fractures, pain on the jaw, face and temporomandibular joint.

Due to size reduction on the teeth during the advanced stages of erosion, patient's frontal vertical face height will be diminished as well as a decline is observed in cheek and facial structure and aesthetic issues will appear. Bite plate used for clenching treatment will prevent damage by greatly minimalizing the strain on your teeth created by force. These bite plates have various hardness levels to be utilized in advanced stages of the condition.

This condition is more frequently encountered in patients who have an inadequate bite (malocclusion), children with parents that have bruxism.

What Are The Symptoms Of Bruxism?

How Is Bruxism Treatment Handled?

Children usually don't start nail biting until the age of 3-4. %33 of children have nail biting habit. During puberty, the amount of nail biting children increases to %40-45. Children with nail biting habits also have parents possessing the same habit. Most of the children who get social validation abandon this habit altogether.

The underlying causes of this habit are usually psychological like thumbsucking. Nail biting is considered as a sign of insecurity. How patients treat their children is also an important factor. Having a strict, overbearing and authoritarian parenting atmosphere at home, jealousy, inadequate care and attention, psychological discomfort and anxiety. The habit is also acquired by imitating others. Any relative who takes up the habit of nail biting will catch the attention of the child. Discriminative or overbearing behaviour from parents can cause rivalry among siblings and trigger nail biting habit.

The Treatment of Nail Biting Habit

The habit needs to be ignored by the parents till the ages of 3-4. If the habit continues, the causes of child's anxiety and maladaptation need to be investigated and resolved. Methods such as reprimanding, frightening or punishing the child will not be beneficial towards eliminating the habit. Children need to be sheltered from any kind of anxiety. Children being involved in violent events is ill-advised due to the anxiety it will bring to the child. Old and light gloves can be worn to prevent nail biting overnight. Rewarding the children every once in a while for their success may be beneficial as well. On the other hand, nails can be deeply clipped.

Thumbsucking is a habit which is observed in children up to the age of 3-4 without any kind of psycho-pathologic cause. Most of the babies suck their thumbs or other fingers. The most important reason of encountering the harmless habit in almost all babies is that infants adopt the habit inside the mother's womb.

Approximately half of 1-year olds have the habit of thumbsucking. After 9 months, it is observed that thumbsucking is closely related to sleep. The efforts of getting the children to shake their habit is met with resistance until the age of 3. While some babies do it as their teeth are erupting, others use this as a method of expressing embarrassment or boredom. Usually becoming frequent at 18 months of age, the habit is expected to vanish around the age of 4. Research shows that thumbsucking is harmless if it stops at ages 5-6. However, if continued, it could cause deformations in teeth.

Parents may worry thinking the effects of thumbsucking on jawbone and teeth. It is true that thumbsucking push teeth forward. How much thumbsucking affects the teeth depends on the duration of the habit and most importantly, the position of the thumb.

The information on this website is not a substitute for an oral examination by a dentist who will provide the patient with a diagnosis of the necessary treatment.